Serbia officially the Republic of Serbia (Serbian:Република Србија / Republika Srbija), is a sovereign state situated at the crossroads between Central andSoutheast Europe, covering the southern part of the Pannonian Plain and the central Balkans. Serbia islandlocked and borders Hungary to the north; Romania and Bulgaria to the east; Macedonia to the south; andCroatia, Bosnia, and Montenegro to the west; it also claims a border with Albania through the disputedterritory of Kosovo. The capital of Serbia, Belgrade, is one of the largest cities in Southeast Europe. Serbia numbers around 7 million residents. 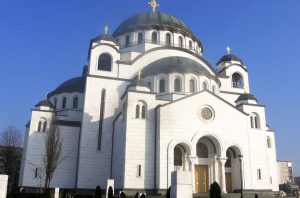 Following the Slavic migrations to the Balkans from the 6th century onwards, Serbs established several statesin the early Middle Ages. The Serbian Kingdom obtained recognition by Rome and Constantinople in 1217; it reached its peak in 1346 as a relatively short-lived Serbian Empire. By the mid-16th century, the entire modern-day Serbia was annexed by the Ottomans, at times interrupted by the Habsburg Empire, whichstarted expanding towards Central Serbia since the end of the 17th century, while maintaining foothold innorthern Serbia. In the early 19th century, the Serbian Revolution established the nation-state as the region’s first constitutional monarchy, which subsequently expanded its territory.[9] Following disastrous casualties inWorld War I, and the subsequent unification of the Habsburg crownland of Vojvodina with Serbia, the country co-founded Yugoslavia with other South Slavic peoples, which would exist in various political formations until the Yugoslav Wars of the 1990s, which had devastating effects for the region. As a result, Serbia formed aunion with Montenegro in 1992, which broke apart in 2006, when Serbia again became an independent country. In 2008 the parliament of Kosovo, Serbia’s southern province with an Albanian ethnic majority, declared independence, with mixed responses from the international community.

Serbia is a member of the UN, CoE, OSCE, PfP, BSEC, and CEFTA. As a membership candidate. Serbia is currently negotiating its EU accession. The country is acceding to the WTO[13] and is a militarily neutralstate. Serbia is an upper-middle income economy with dominant service sector, followed by the industrial sector and agriculture. The country ranks high in Social Progress Index (45th) as well as Global Peace Index (46th), relatively high in Human Development Index (66th). and an economically moderately free country

Located at the crossroads between Central and Southern Europe, Serbia is found in the Balkan peninsulaand the Pannonian Plain. Serbia lies between latitudes 41° and 47° N, and longitudes 18° and 23° E. The country covers a total of 88,361 km2 (including Kosovo), which places it at 113th place in the world; with Kosovo excluded, the total area is 77,474 km2,  which would make it 117th. Its total border length amounts to 2,027 km (Albania 115 km, Bosnia and Herzegovina 302 km, Bulgaria 318 km, Croatia 241 km, Hungary 151 km, Macedonia 221 km, Montenegro 203 km and Romania 476 km). All of Kosovo’s border with Albania (115 km), Macedonia (159 km) and Montenegro (79 km)  are under control of the Kosovo border police. Serbia treats the 352 km long border between Kosovo and Central Serbia as an “administrative line”; it is under shared control of Kosovo border police and Serbian police forces, and there are 11 crossing points.

The Pannonian Plain covers the northern third of the country (mainly Vojvodina and Mačva) while the easternmost tip of Serbia extends into the Wallachian Plain. The terrain of central part of the country, with the region of Šumadijaat its heart, consists chiefly of hills traversed by the rivers. Mountains dominate the southern third of Serbia. Dinaric Alps stretch in the west and the southwest following the flow of the rivers Drina and Ibar. Carpathian Mountains andBalkan Mountains stretch in north–south direction in the eastern Serbia.

Ancient mountains in the southeast corner of the country belong to Rilo-Rhodope Mountain system. Elevation ranges from the Midžor peak of the Balkan Mountains at 2,169 metres (7,116 feet) (highest peak in Serbia, excluding Kosovo) to the lowest point of just 17 metres (56 feet) near the Danube river at Prahovo. Including Kosovo the highest point is Đeravica, Prokletije (2.656 m), the largest lake is the Đerdap Lake (163 square kilometres or 63 square miles) and the longest river passing through Serbia the Danube (587.35 kilometres or 364.96 miles.