Main articles: List of rivers of Serbia and List of lakes of Serbia
Almost all of Serbia’s rivers drain to the Black Sea, by way of the Danube river. The Danube, the second largest European river, passes through Serbia with 588 kilometers (21% of its overall length) and represents the largest source of fresh water. It is joined by its biggest tributaries, the Great Morava (longest river entirely in Serbia with 493 km of length), Sava and Tisza rivers.[36] One notable exception is the Pčinja which flows into the Aegean. 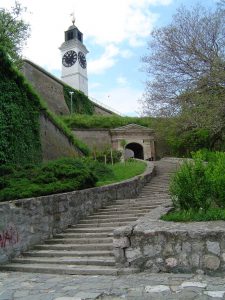 Due to configuration of the terrain, natural lakes are sparse and small; most of them are located in the lowlands of Vojvodina, like the aeolian lake Palić or numerous oxbow lakes along river flows (like Zasavica and Carska Bara). However, there are numerous artificial lakes, mostly due to hydroelectric dams, the biggest being Đerdap (Iron Gates) on the Danube with 163 km2 on the Serbian side (a total area of 253 km2 is shared with Romania) as well as the deepest (with maximum depth of 92 m); Perućac on the Drina, and Vlasina. The largest waterfall, Jelovarnik, located in Kopaonik, is 71 m high.[37] Abundance of relatively unpolluted surface waters and numerous underground natural and mineral water sources of high water quality presents a chance for export and economy improvement; however, more extensive exploitation and production of bottled water began only recently.