Differences in elevation, proximity to the Adriatic Sea and large river basins, as well as exposure to the winds account for climate variations. Southern Serbia is subject to Mediterranean influences However, the Dinaric Alps and other mountain ranges contribute to the cooling of most of the warm air masses. Winters are quite harsh in the Pešter plateau, because of the mountains which encircle it. One of the climatic features of Serbia is Košava, a cold and very squallysoutheastern wind which starts in the Carpathian Mountains and follows the Danube northwest through the Iron Gatewhere it gains a jet effect and continues to Belgrade and can spread as far south as Niš. 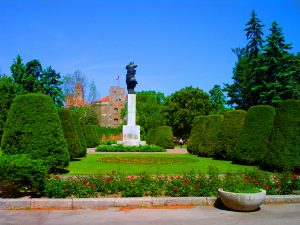 Serbia is one of few European countries with very high risk exposure to the natural hazards (earthquakes, storms, floods, droughts). It is estimated that potential floods, particularly in areas of Central Serbia, threaten over 500 larger settlements and an area of 16,000 square kilometers. The most disastrous were the floods in May 2014, when 57 people died and a damage of over a 1.5 billion euro was incited.